Fighting for Acceptance: The Life of a Muslim Woman in Swiss Society

Muslim women in Switzerland have recently drawn widespread attention to their presence in a land that has housed the League of Nations and now most famous for the second largest United Nations Office in Geneva.  It is unimaginable, therefore, for Muslim women to feel like strangers in their own homes, isolated from society and attacked on a number of occasions as a result of their choice to identify themselves through their personal religious beliefs.  This is, however, the reality faced by many Muslim women living in Switzerland as the rise in prejudice and Islamophobia has begun to affect even the ability to earn a living as well as the freedom to enjoy a recreational life- liberties and necessities that people often take for granted.  Despite such oppression, there is a strong resolve among the Muslim community to draw attention to the plight of these women and change current attitudes towards Muslim women in Swiss society.

«Who speaks of liberty while the human mind is in chains?»  ~Francis Wright

One of the most noticeable features of a Muslim woman is her coverings. The hijaab (headscarf), the niqaab (veil), and various other forms of coverings sporting Middle Eastern terminology such as the burqa, the khimaar and the abaya, are often seen on Muslim women throughout Switzerland. Those who are ignorant about Islamic dress codes believe that women who adopt such clothing do so under duress. In addition to this, it has often been reported that Muslim women adopt such clothing in order to isolate themselves from society, viewing their personal religious beliefs and practices as incompatible with Western values. Women are often taunted openly with onslaughts of prejudice, verbal abuse on the street by ignorant members of society; they are stared at strangely by many as well as identified by small children as being a thing to be feared. Reportings of such abuse have been widespread and recorded by the Islamic Central Council in Switzerland, a body that has been established, among other matters, to address these daily challenges faced by Muslims in its community. Unfortunately, trying to highlight the plight of Muslim women is a continuous struggle because many people in Swiss society refuse to accept that these degradations of Muslim women actually exist in society. There are a number of prominent Muslim women who have been given the opportunity to voice their reasons for adopting the Islamic coverings, and despite their efforts on television programmes, newspaper interviews and blogs to convince society that they truly enjoy wearing Islamic clothing in honour of their religious beliefs, the majority of Swiss society are still chained to the principle that women are forced by family members or «oppressive» husbands to cover modestly; or if it is their choice, it is wrongly believed that such practices harbour an ulterior motive, namely, to break away and separate Muslim women from mainstream Swiss society. Such attitudes have permeated the Swiss job market and educational establishments to a degree that a number of Muslim women have reported unjust treatment when seeking work or have faced unfair dismissal and lengthy court proceedings due to the fact that they are unable to work as school teachers or even sales assistants whilst asserting their right to wear the covering. Although Muslim women in Switzerland make every effort to educate themselves in order to enter the job market and take part in other regular services to society, prejudicial attitudes among the general public have culminated in a resolve that the image of the Muslim woman is not welcome in any sector of the Swiss social order: her image simply doesn’t represent what it means to be «Swiss»; as a result, for a Muslim woman to fully integrate into Swiss society she must remove her covering, abandon her Islamic identity or face consequences that result in her being socially outcaste and, quite often, financially crippled.

«If bread is the first necessity of life, recreation is a close second.» ~Edward Bellamy

Recreation is a real necessity in day-to-day Swiss life. Take a trip to the capital city of Bern on a warm summer afternoon and you’ll witness communities coming out to bask and bathe in gentleness of the River Aare: breaking up a tough working day, releasing stress and catching up on a chance to meet with friends. The benefits of exercise are no secret to people who live hectic working lives: swimming in particular is known to relieve the mind from stress and tension as well as keep the body in great shape. It is therefore a right for everyone in society to have reasonable access to facilities in order to engage in activities that enhance the quality of life. A Muslim woman living in Switzerland is not averse to such pleasures and adores a regular dip in public bathes. Of course there are certain restrictions that she must adhere to according to her beliefs: she must remain modest when entering such bathes. 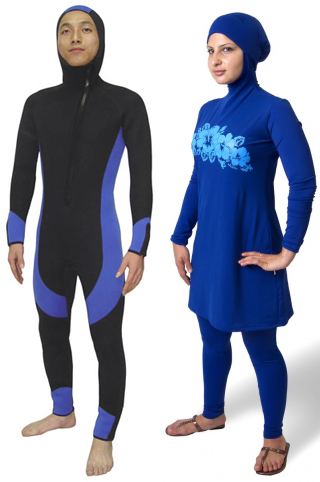 Can you spot the difference? The Swiss Muslim woman in the typically modest Islamic swimwear, otherwise known as the «burkini», is not such a far cry from the professional diver in his diving suit. Yet, there are a growing number of public establishments that refuse these women entry either on the pretence that her modest bathing suit is «unhygienic» or because, and as blatantly put, «religious symbols» are not welcome in private bathing establishments.

Such refusals and attitudes are an unashamed practice of ostracising Muslim women living in Switzerland. Not only is a Muslim woman barred from the employment sector and education establishments, but she is further oppressed in her right to engage in recreational activities which are part and parcel of Swiss life. The Muslim woman in Switzerland has, on a social level, been denied the two foremost necessities of life, and thus, in society, she ceases to exist.

«…Society is wonderfully delightful. To be in it is merely a bore. But to be out of it is simply a tragedy.» ~Oscar Wilde

Muslim women in Switzerland are not on a mission to be underscored purely because of their difference in religious belief, neither are they tasked to break the fabrics of society by becoming the «other». Muslim women in Switzerland are facing an uphill struggle to integrate into the society that many of them were born into as well as exercise their right to religious freedom and rather be celebrated in their differences and not demonized.  Sadly, they are at this present moment battling with misguided attitudes in their communities to avert the tragedy that Oscar Wilde so rightly points out.  If to be in society is a bore, then it is a bore that would be greatly welcomed from Muslim women in Switzerland, for it is a better alternative than to remain outside the fold of society, attacked for a religious belief, oppressed for adopting modest practices and isolated because the vast majority of human minds have resided themselves to be chained in the stereotypes of the Muslim woman that have been perpetuated across the modern, «free-thinking» world.