I am a fan of Aesop’s tales. I have often found them a great way of teaching naughty children the idea that all actions have consequences and in every story something can be learnt in terms of morals. Here is one of my favourites: 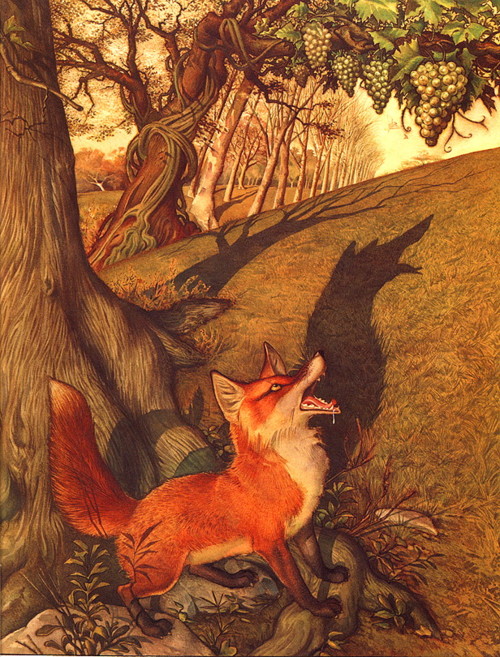 The Fox and the Grapes

One hot summer’s day a Fox was strolling through an orchard till he came to a bunch of Grapes just ripening on a vine which had been growing over a lofty branch.  „Just the thing to quench my thirst,“ he said. Drawing back a few paces, he took a run and a jump, and just missed the bunch.  Turning round again with a one, two, three, he jumped up, but with no greater success.  Again and again he tried after the tempting morsel, but at last had to give it up, and walked away with his nose in the air, saying: „I am sure they are sour.“

The last few weeks have no doubt been testing times for the Islamic Central Council of Switzerland (ICCS). In less than a fortnight, the ICCS, organizers of this year’s Islam Unity 2012 have battled hard to bring to fruition an event that aimed to positively give back to the Muslims of Switzerland and invite the Swiss public to experience what Muslims from around the world had to say on morals and ethics in light of the religion of Islam. Islam Unity 2012 was an event to deal head-on with community issues specifically targeting the ethics and morals of our youth today. It was a chance for religious community leaders from across Europe and the Middle East to impart their knowledge and wisdom about morality in society and what this means for the Muslims globally. An eye-catching ICCS film production entitled “Trials of Life” aims to get Swiss Muslim youth thinking about how they chose to live their lives and how their actions, constructive and negative, could affect others. The Islam Unity How Green is Islam? essay competition that offered a 2000 CHF cash prize was intended to encourage the youth to think about societal problems relevant to Switzerland specifically nuclear energy and global warming and what arguments could be drawn from an Islamic perspective for or against nuclear energy.

This event was to send out a clear message:  religion does not have to be an obstacle to integration into Swiss society and religious leaders can be utilized to better inform the youth about their future role in society whilst teaching them to hold on to the tenets of Islam that perfect character. Nevertheless, the obstacles that have come to pass this week in an attempt to crush the efforts of the ICCS to obtain a site to carry out the event were such that would put Odysseus to shame. The tale begins with the injustice reeked by city counsellors in Bülach who were the first city to turn down the event upon the premise that the ICCS were “extremists”. They had later rendered the concluded contract void with the backing of a court decision stating that the organizers had not obtained police permission to carry out the event. Then, to the city of Spreitenbach, where the ICCS secured a circus site putting Islam Unity 2012 back in the running. Spreitenbach city counsellors, following Bülach, also claimed that this contract was void on a technicality and in lieu of a “special” permission that had to be obtained by the ICCS from local authorities, a “special” permission that was neither elucidated in terms of where it could be obtained nor about its purpose. Among other issues, the Spreitenbach counsellors raised concerns about the possible high levels of traffic at the site which is located close to a large shopping district, where parking spaces are more than adequate to deal with an increase in numbers for the half-day event. And finally, the straw which broke the camel’s back, the ill-founded accusations that the ICCS had deceived city councillors in Spreitenbach in a contractual stipulation. It was claimed that another party had been mentioned on the police permission form going by the acronym “IMS” instead of “IZRS”-the German acronym for the Islamic Central Council (ICCS).  It was argued that the ICCS deliberately tried to conceal their identity and this accusation of deception was quickly hyped up and spread widely across Swiss media, but fortunately, it was swiftly retracted on proof that the ICCS had maintained truth and integrity in dealing with the contract and the mistake was later attributed to the production company who had incorrectly filled out the permission form.

These impediments not only aimed to put an end to an event that could have potentially attracted large numbers of interested attendees, but asides from all the obvious Islamophobia, it may also have revealed an underlying threat perceived and somewhat knowingly obscured by Swiss authorities: the ICCS clearly has the potential of influencing and reaching out to a considerable proportion of Swiss Muslims, especially the youth.  But there are of course two conflicting understandings of what this “reaching out” entails.  Part of the Swiss public are convinced that the ICCS is an extremist organization aimed at influencing Swiss Muslims with a radical ideology. On the other hand, commentators who have attended previous ICCS rallies and conferences would say otherwise. Certainly, there is an intention to influence Muslims in Switzerland and undoubtedly at grassroots level, but according to the idea of Islam Unity 2012 this influence aims at a perfection of character, a strong emphasis on the pursuit of education and knowledge as well as identifying with not only being Swiss but being proud to be a Muslim by associating with tenets of Islam and recognising the positive influences this code of belief can have on societal relations in Switzerland. Despite the fact the ICCS is a registered association in Bern and has a legally valid statute, a General assembly, transparent structures, well-educated board members and many members who are pursing undergraduate and post-graduate studies, it is mostly identified through negative press which has created a pariah status out of the ICCS by attaching it to unfound claims of extremism.  This has no doubt been whipped up and manifested through the recent impediments surrounding Islam Unity 2012. But what about the nature of this “threat”: many societies in the west and east, but specifically across Europe, including France and their suburb riots of 2009 and the UK and its London riots of 2011 have lost touch with the youth of their society and there is somehow a rising envy that organisations like the ICCS have consistently been able to address this issue to a degree of success to which governments on a national level seemed to have failed. Of course, this remains debatable, some may argue a far reaching observation, but I’ll leave you with the moral from Aesop’s tale to make your own mind up: It is easy to despise what you cannot get.